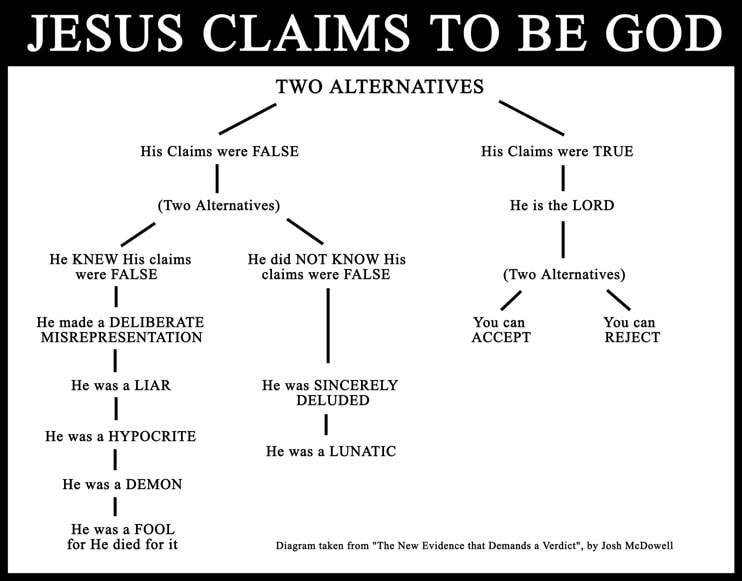 "Jesus said to them,
“Most assuredly, I say to you, before Abraham was, I AM.”
- John 8:58
(This is the exact same "I AM" from the Burning Bush in the Old Testament (Exodus 3:14))
And that "I AM" was/is God.
"The Jews answered Him, saying, “For a good work we do not stone You, but for blasphemy,
and because You, being a Man, make Yourself God.”"
- John 10:33
This is why the Jews killed Jesus - because He claimed to be God!
God wants you to:
ESCAPE JUDGMENT
And begin your wonderful new relationship with Him,
and learn about the glorious future that awaits you!

* Judgment: The Great White Throne Judgment (Revelation 20:11-15)
"Then I saw a great white throne and Him who sat on it,
from whose face the earth and the heaven fled away. And there was found no place for them.
And I saw the dead, small and great, standing before God, and books were opened.
And another book was opened, which is the Book of Life.
And the dead were judged according to their works,
by the things which were written in the books.
The sea gave up the dead who were in it, and Death and Hades
delivered up the dead who were in them. And they were judged, each one according to his works.
Then Death and Hades were cast into the lake of fire. This is the second death.
And anyone not found written in the Book of Life was cast into the lake of fire."

"Through one man's (Adam's) offense/sin:"

"Judgment came to all men, resulting in condemnation."
"Sin entered the world and death through sin."
"Death spread to all men."
(Physical death and spiritual death/condemnation/hell)
(Romans 5:12; 5:18)

"God demonstrates His own love toward us, in that while we were yet sinners,
Christ died for us, giving His life a ransom for many."
(Romans 5:8)

So, "Christ died for our sins according to the Scriptures; and He was buried,
and He rose again the third day according to the scriptures.", "We...were eyewitnesses."
(1 Corinthians 15:3,4; 2 Peter 1:16)

“For God so loved the world (you and me) that He gave His only begotten Son,
that whoever believes in Him should not perish but have everlasting life.”
(John 3:16)

"In Him we have redemption through His blood, the forgiveness of sins."
(Ephesians 1:7)

And now "by grace you have been (can be) saved through faith, and that not of yourselves;
it is the GIFT of God, not of works (doing good), lest anyone should boast."
(You cannot earn your way to heaven by being good or doing good things. It's a FREE GIFT)
(Ephesians 2:8-9)

"It is appointed for men to die once, but after this the judgment."
(Hebrews 9:27)

"He who does not believe God has made Him a liar, because he has not believed
the testimony that God has given of His Son.
And this is the testimony: that God has given us eternal life, and this life is in His Son.
He who has (believes in) the Son has life; he who does not have (doesn't believe in)
the Son of God does not have life.",
"but the wrath of God abides on him." and he “…WILL be condemned.”
(1 John 5:10-12; John 3:36; Mark 16:16)

“He who believes in Him is not condemned;
but he who does not believe is condemned already,
because he has not believed in the name of the only begotten Son of God.”
(John 3:18)


PUT YOUR FAITH IN HIM TODAY!

"If you confess with your mouth the Lord Jesus and believe in your heart
that God has raised Him from the dead, you will be saved.
For with the heart one believes unto righteousness,
and with the mouth confession is made unto salvation."
(Romans 10:9-10)


WHAT TO DO NEXT


Sample prayer:
Dear God, I believe You. I believe You sent Jesus Christ to die (pay the penalty) for my sins,
and that He was buried and that You raised Him from the dead on the 3rd day.
I believe Jesus was who He said He was.
I now confess and put my faith in Jesus Christ as LORD and the only one
who can save me from judgment.
I now look forward to my new relationship with You
and the wonderful future you have in store for me. Thank you!

To learn more about God & the Scriptures, lookup these on YouTube:
1) Refuge Church Atascadero (Book by book, verse by verse through the bible)
2) Dr. Chuck Missler
3) Dr. Walter Martin
4) Tune in to CSN Radio Online